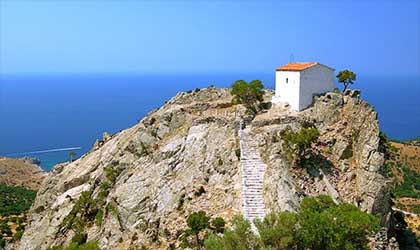 In the ancient city near the Towers of Genoese is the great basilica, which was built to commemorate the visit of Apostle Pavlos on the island. It was revealed in 1938 by the American School and it has not yet completed its investigation. It was also revealed the existence of an early Christian basilica in Kamariotissa in 1972, which is not rescued. Apart from these two early Christian basilicas, the numerous churches and chapels that are scattered throughout the island attract a special interest. The tradition refers to 999 Byzantine and post-Byzantine monuments of which the Monastery of Christ on the east side of Therma, the Monastery of Agios Athanasios near the village Alonia, the church of Agia Eleni in Kladerou, the church of Agios Theodoros in Geroplatanos, the church of Agios Georgis in Strivero, a three aisled basilica of the 10th to 11th century, and three churches in Alonoudi are indicatively mentioned. Smaller chapels of this category are Virgin of Chouvouliou in the homonymous medieval village, Prophitis Ilias in the eastern end of the island in Kipoi and Virgin Krimniotissa in the south side with spectacular sea views, etc.