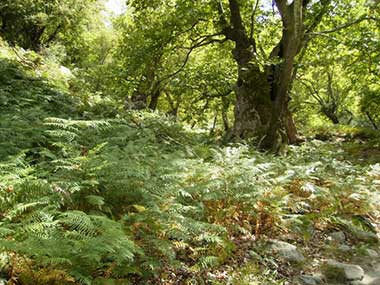 The island is characterized by dense vegetation, many forests and a lot of water sources. In the northern part of Samothraki dominate plane trees, olive trees, oaks, walnut trees, maples and cedrus bushes. Large areas of the island are covered by plane trees which often reach down to the sea. In Samothraki you will also encounter some rare trees not only in Greece but throughout the Mediterranean Sea, such as Itamos and Celtis. In the southern part of the island you will find mostly olive groves and a plain of farmland.

The bushes that grow on the island are tsikoudies, arbutus, pistacia, myrtles, roses, grape vines, pear trees, spartiums and heathers. Large area is mainly occupied by scrubs, myrtles, arbutus and phyllyrea latifolia. Also, rare species of cactus are encountered on the way to Lakkoma. What’s more, a large area of ​​forest is covered with perennial oaks and particularly with the species: Quercus frainetto, Quercus pubescens and Quercus dalechambii. At the region of Kipoi there is a natural pine forest and an artificial pine forest is around Samothraki.

In only three islands of Greece Samothraki, Thasos and Euboea you can meet the evergreen trees with their ruddy fruit, the so-called Itamos (taxus baccata). They live many years hidden in the ravines and make their presence forcefully observable in the landscape of Samothraki. Also, the cedars Juniperus excels and Jupinerus foetidissima dominate in the inaccessible slopes of the island. Finally, at various altitudes there are scattered two kinds of junipers Juniperus foetidissima and Juniperus excelsa.

The meadows that stretch over 1300 meters altitude are very important for the flora of the island. As a result of the high altitude of the island is the creation of eight endemic plants, ie. Plants that thrive only in Samothraki and the most famous of them is the Scrophullaria spinulescens which is a species that grows in nature without human intervention at an altitude of 800-1600 meters. Generally, on the island there are about 1000 species of flora including 20 rare and 14 endemic plants.