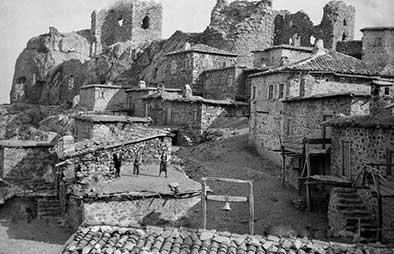 It has received its name from the “Aitsa”, i.e. the terrace which was a peculiar way of housing. The “Aitsia” was as it follows: Over the main part of construction the makers were placing algae and covering them with a layer of clay and then they smearing atop coat layer of clay soil. The maintenance of this latter layer was succeeded by using marble rollers which were permanently remaining on the terraces.

The “aitsenia houses of Samothraki were having two floors with a very simple functional layout. As a rule the residence had a seamless space and used the upper floor as a living space and the first floor as an ancillary room. These houses had a characteristic simplicity. The main characteristic of the houses was the fireplace where above it there was the “michani” i.e. the shelf and the “Yuki”, i.e. an oblong closet along the wall. On the “Yuki” there was the “Bastos” for the placement of blankets, rugs and wefts on layers. At a corner of the floor there was the “klavani” which was serving the communication with the first floor. There were pillars in the center of the house so as to support both the floor and the roof.