The years of Turkish domination 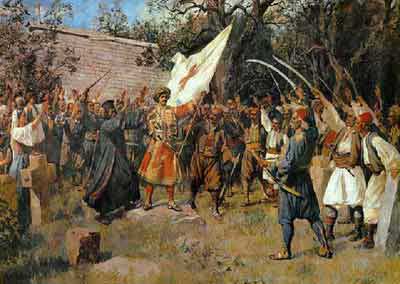 In the middle of the 15th century Samothraki is under the sovereignty of Sultan and after the Fall of Constantinople in 1453, most of the inhabitants settled in Constantinople so the island passed definitively into oblivion. The situation seems to be changing only in the late 18th century after the brief Russian domination. In the early 19th century the population is significantly increased and simultaneously an economic rise is observed. This upward trend will be abruptly halted by the Turks in 1821, who will disembark on the island to suppress the local insurgency. The great slaughter of Samothraki was on Tuesday 1st September 1821 in the area “Fkas” where 700 soldiers were slaughtered. Those who escaped were sold and among them there were the five Martyrs who in 1836 returned and martyred in Makri. Their memory is celebrated in Samothraki, in Makri and on Athos Mount on Sunday of Agios Thomas. The Greek fleet releases Samothraki on 19th October 1912, while its annexation in 1914 is ratified by the Protocol of Florence.