The Towers of Samothraki 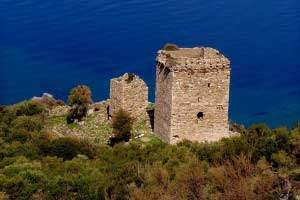 In the ancient city the Byzantine fortifications include three towers, one of which survives almost intact. Ancient building material which was plentiful in the surrounding area was used for their establishment. Later with the relocation of residents in Samothraki, Gattilusi strengthen the fortifications with the famous Genoese tower that dominates at the end of the settlement. Also, at the cape, where Fonias flows, there is a single tower of the time of Palaeologos.