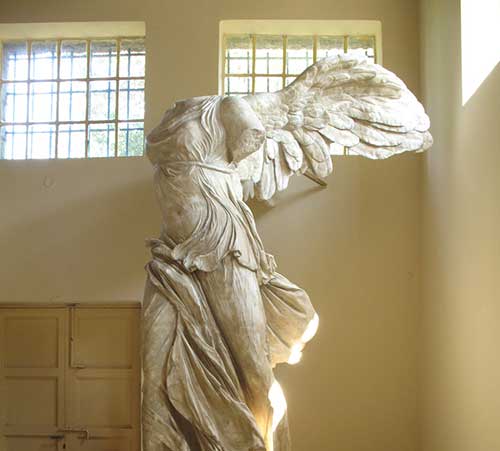 Nike of Samothrace or else named Winged Victory of Samothrace was found in 1863 near the Temple of Great Gods by the French consul Sapouazo. Since then it was transferred to the Louvre in Paris, where it remains to this day and is exposed in a prominent position as one of the most important exhibits of the museum. It is made of marble of Paros and has a height of 3.28 meters and reaches 5.58 meters with the prow of the ship on which it is located today. It was dedicated to the temple of Samothraki, dated in 190 BC. A version of archaeologists for the tribute for many years was that Dimitrios Poliorkitis (337-283 BC) had offered it when he defeated Ptolemy’s fleet off the coast of Cyprus around 290 BC. Today, however, many people believe that Rodioi offered it in 191 BC when in alliance with Pergamos, defeated Antiochos III of Syria in a naval battle off the coast of Sidi. You will see a model of the famous statue of Nike in chamber D of the archaeological museum of Samothraki in Palaiapoli.