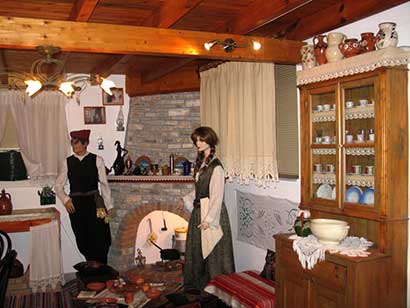 For years the Cultural Association of Samothraki in cooperation with the municipality of the island founded the Folklore museum in Samothraki, which is located next to the Church of Holy Mary. The collection of objects that are currently housed in the Folklore museum began in 1985, where many of the residents donated many of the objects to the Cultural Association so as to exhibit them. The folklore museum is open during the summer months from 8 am to 2 pm and from 17:30 until 23:30 in the evening.

On the ground floor of the museum the visitor will encounter agricultural tools, the traditional loom, tools for editing threads and a local breeder’s tools. On the first floor of this traditional building that houses the museum there is the household of an old house of Samothraki with mixed urban and folk elements. In the same area you will also find the bedroom, the living room and the kitchen of such a house. The walls are covered with woven, cotton and silk towels, the so-called “marchamades”, while in the space a wooden closet called “mesandra” dominates as it was usual in all the households of the island. Further down you will meet the fireplace with the sofras (a wooden round table), a space that women were using as a kitchen.

The iron bed of the house is covered with a pure silk blanket and there is also the living room which someone could see it only in the houses of wealthy families and it was consisting of a wooden table and a sofa. You will also see the rich collection of textiles, the wood carved iconostasis and rare icons that existed in the churches of the island, decorative plates from the coast of Asia Minor and several chests that housewives were using for storing clothes.

Finally, in the museum there are traditional costumes of the local people. The female costume consists of a full-length skirt (red, blue or green) and a white scarf that falls on the shoulders. The male costume is more complex and consists of a pair of breeches, a shirt, a waistcoat, a pair of tsarouxia (a kind of shoes with a bobble), a belt, the stockings, a frock coat and a bonnet.