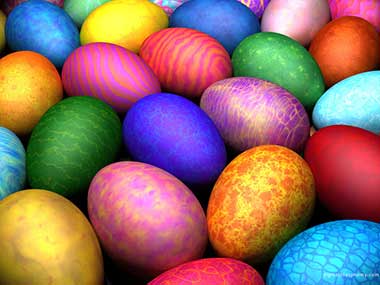 During Lent people of Samothraki weren’t singing, they were only droning the lament of Virgin and St George’s song. On Saturday of Lazarus the children were flooding in the neighborhoods holding wicker baskets with colorful rags, called “Roumania” and were singing: “Roumania, roumanizomai, for five eggs we are wandering.” Then housewives were giving them eggs and the children were cutting a rag from the basket and tying it at the door of the house. On Great Wednesday it was very important not to spill water in the yard so as to protect Christ from slipping. On Holy Thursday evening, after the end of liturgy, the people were staying up late in the church droning laments for Christ. On Holy Saturday afternoon they were making a scarecrow called “Birio”, an effigy of Judas, and were burning it in the square of “Platanos” next to the church of the main village of Samothraki.