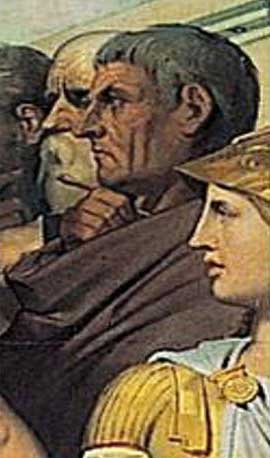 He was a famous Alexandrian scholar, a critic, an interpreter and the creator of the Aristarcheion faculty. He left Samothraki when he was in a very young age and went to Alexandria where he became the student of Aristophanes of Byzantium who was the director of the library. Later, he became the director of the library of Alexandria and at the same time he was the educator of the royal family. He had very important personalities as students such as Dionysius Thrakas, Apollodorus Pindariona and Ptolemy Ammonio etc.

It is said that Aristarchus had a proverbial memory and he didn’t care at all about his appearance.

When Ptolemy VII was the king Aristarchus left Alexandria fearing for his life and went to Cyprus where he died in 144 BC from voluntary starvation.

On the one hand the great value of Aristarchus is confirmed by the way he interpreted the ancient texts which formed the basis of literary criticism and on the other hand by his large and important work which is the interpretation of the Homeric epics and mostly their avoidance from previous misleading structures.

Aristarchus’s posthumous fame culminated at the later Hellenistic times and in the mid 19th century when the German Hellenist Johann Augustus Naouk was talking about “Aristarchomania”.