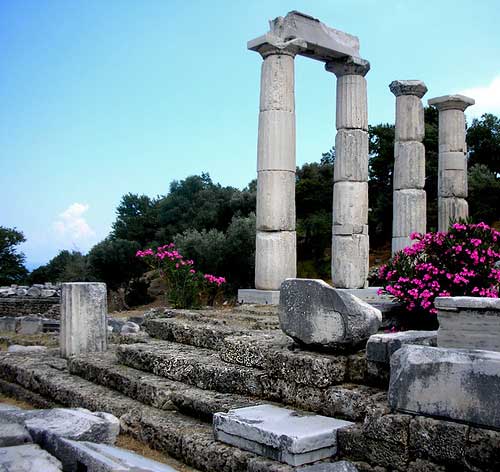 The ancient city was built at the northern foot of Mount Saos at 1448 meters and was fortified with boulders of different sizes which were reaching the height of 4.5 meters and thickness of 2.5-4 meters. There are also newer parts of structural masonry with quadrilateral stone plinths, and parts of a polygonal structural system. The precinct of the island with the city was covering 200m2 surface, dating from the 6th to the 3rd century BC. A tiny part of the buildings in town has been revealed. In most parts of Samothraki the ruins of the ancient city are hidden beneath dense vegetation.

From the five gates of entrenchment, in the southwestern part there was the 1st gate that was connecting Samothraki with the Temple of the Great Gods. The group of the Temple consists of sacred monuments of the 4th and 3rd century BC, but its usage is certified since ancient times. The entrance to the site was through Ptolemy’s entry gate, part of which still survives today. In the southern part there is “the city of dead” where hundreds of burials were found. The main area of the Temple consists of dozens, luxurious buildings and structures, made ​​of local limestone and marble from Thasos. The most important of these are the palace, the Temple, the Dome of Arsinoe, the building with the dancers, Stoa, the Neoron and the Offering of Milisia. At the southern end of the site, there is the Monument of Nike were Nike of Samothraki was standing proudly. The port of the ancient city was outside the fortifications and was first mentioned in the 4th century BC and recently in the acts of Apostles. A part of the harbor is still visible in the sea.

Across Palaiapoli remains of Byzantine fortifications were found. At the site of the ancient city, the Byzantine fortifications include a trench and three towers, of which one survives almost intact. At this point there is the early Christian basilica, which was built to commemorate the visit of Apostle Pavlos on the island that went through here in 49-50 AD. In the region at the position Keramidaria a complex of pottery workshops was discovered that was used from the Hellenistic to the Roman era.

In the 10th century the relocation of residents in Samothraki occurred so as to protect residents and property from pirates’ looting that plagued that time the island.